The Color Purple musical  left Boston a few days ago and is on its way to another venue now.

Here’s what some people had to say who saw it.

“..it was amazing and Im glad that they are involved with the Black community. I know I got a notice that the YPN would be having a The Color Purple night and they would be going early and meeting that cast (something I would have loved to do), but all in all that show was AMAZING, and…My friend and I had a really enjoyable evening.”
#

“… it was such a wonderful show, my mom and I enjoyed it was such a great musical. I think it will do very well here in Boston there is a buzz already.”
#

“It was great. ..my daughter and her friend says the seats were great and the play was ‘FANTASTIC'”
# 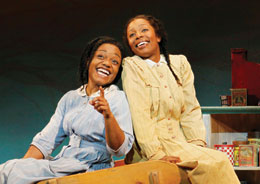 “I would go back again, and again, and again if I could!” exclaims Cindy Reed, one of scores of Dorchester residents who received free tickets for the June 16th Community Night performance of “The Color Purple,” the hit “musical about love….”

Our visit to the theater last night was a triple treat. We saw a terrific performance of a fabulous show. I got to spend the entire Fathers’ Day with my first-born. And the piece de resistance: Ti and I sat next to a fascinating and accomplished actress, Miquel Brown, who is in town shooting a film.
#

Despite the heavy storyline, the musical is full of life, light, and humor; I didn’t expect to laugh and be moved as much as I was. The entire cast was great and presented solid singing, dancing, and acting, although the woman who plays Sophie stole the show.
#

We are here to offer you the best available solutions. Quality workmanship at an affordable competitive price is essential to our success to date.

Provides Arts Education and Performances to General Public, and School Systems Grade K to College
Del Alma Battle and the Art of Black Dance and Music.

Things to do, places to go

Black Americans are invited to this paid research study