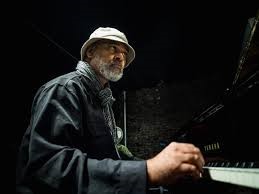 Friday, September 7th – People filled the room inside the Lily Pad’s decorative space to experience Trio Plex. Their instruments produce sounds clashing, rising, falling and roaring like rapids throughout the night, so often. Band members were well achieved – all of them, masters of their bass, piano and drum kit instruments.

These artists were like the mystical jazz musician personas of the early years you read about, flashing independent streaks of spiritual relief or angst, by bending, shaping and twirling notes and layers of their intricate compositions. The audience got their money’s worth, and they got a lesson when Cooper Moore performed in spoken word delivery “JAZZ AINT NOTHING BUT A PROSTITUTE, JAZZ AINT GOT NO MAMA, MAMA WAS THE BLUES Bebop and Swinging!” It was unexpected.

The Creative Music Series proudly welcomes Great Black Music, Jazz from prime lower “downtown” NY musicians a first for Boston (and anywhere!) world-class, master improvisers together as The Trio Plex (maybe the best improv-Jazz drummer, pianist/multi-instrumentalist & bassist together you may not have ever heard of (yet)). Each a leader in their own right, now together for the first time in performance!

The NY-based and new Trio Plex consisting of Michael T.A. Thompson, Cooper Moore and Ken Filiano who have been listening, creating and deconstructing music separately for many decades—they continue to influence the direction of free music— have decided to combine forces to reach new dimensions for the drums, piano and bass.

Michael T. A. Thompson:   “Completing the quartet is drummer Michael T.A. Thompson, who brings a loose and propulsive animation to every moment of these proceedings, matching the force of Filiano’s lines and ostinati with a sense of liberation”,  Moments Notice;

“…Drummer drummer Thompson couldn’t be a more correct choice to give fire to the music comprising “Dreams From a Clown Car.” Another remarkable achievement.”-Clean Feed Records.

“What is this…? An absolutely new way in the approach of jazz! … This is free jazz with a high level of joy in the performance but also of fun in the music itself : rhythmic complexities, some hard blowing at times, and especially the incredible interplay on these short yet to-the-point pieces.  review of the eponymous album.

Ken Filiano: “Critics have called him a ‘creative virtuoso,’ a ‘master of technique’ … “a paradigm of that type of artist. . . who can play anything in any context and make it work, simply because he puts the music first and leaves peripheral considerations behind”. New Music USA.   “

“I got to be in a two-man bass section with him on an orchestra thing a while back and it was SO AWESOME. I took a lesson with him that radically changed my thinking about physics and relaxation. He gave me tools in one lesson that will last me forever.  A really underappreciated player…”  Bass player Rueben

The Trio began with a longing to hear something different, and together they hope to create new levels of flexibility and enjoyment to the typical bass, drums and piano format. As musicians they always thrive for new horizons and in this situation we put it into action as a collective thought process. Each individual will attempt to manifest his own thinking in the midst of everyone else’s and as a result will transmit a new place of succession. The music will involve some form, some free and some dissonance.

They are excited about this new trio and look forward to sharing new liberating, rhythmic, creative, and exceptional music in new horizons…

Bios:
Soundrhythium (aka drummer) Michael T.A. Thompson is an anomaly. T.A.’s palate encompasses an abundance of sound colors. He hears everything and plays with it in a way that’s ever inventive and perceptively responsive. Thompson plays as he breathes. You’ll always find him in the moment, inspired as well as inspiring.

Born (1955) in Miami, Florida, at an early age he knew he wanted to play music after hearing Gene Krupa and Buddy Rich.

Years later in the summer of 1964 at the age of nine he moved to the US Virgin Islands, giving him his first real exposure to “Live Music.” There he started the process of learning how to play the drums. When he first played the music it was based on improvisation.

As time went on he started to do gigs and became very interested in composition. He studied, listen and played all kinds of music from Caribbean to Jazz and everything else in between. He admired great drummers that wrote music. Max Roach was at the top of the list at that time. When he became aware of John Coltrane he knew the journey of music would never end. He listened to all of the great drummers, Elvin Jones, Art Blakey, Philly Joe Jones, Sidney “Big Sid” Catlett, Tony Williams and the list goes on and on.

After graduating from high school he decided he would attend Berklee—he first took two years to do some intense studying of music theory/chord building, basic arranging and composition—stay for a few years and head to New York which was his dream (and) he thought Berklee would be the place that would prepare him for New York.  After about 2-3 years, he then headed for New York.

Cooper Moore (DOB: 8/31/46) is a composer-improviser, instrumentalist, designer and builder of musical instruments, and music educator, living and working in New York City. He has composed music for theater, dance, film and has toured extensively in Europe as well as the U.S. While his attention is focused on piano performance in New York clubs and touring abroad, Cooper-Moore designs and builds musical instruments and has played them in collaboration with all kinds of artist at lofts, galleries, artist spaces, museums, and in the streets of New York City.  Among the many unique instruments he has built are the the twanger, ashimba and diddley-bow.

At age 8, he was recruited by community leaders to be the piano player for the town, and soon thereafter performed at church services and community functions. When he was 12 years old, he heard musicians such as Ahmad Jamaland Charles Mingus, and was inspired to pursue jazz. He has cited pianist Jaki Byard‘s contributions to Mingus’ band as a particular inspiration.

He moved to Boston in 1967 to briefly attend Berklee College of Music. In Boston he connected with many musicians, some of whom became longtime collaborators, notably David S. Ware, Marc Edwards, Cleve Pozar, and Juma Santos. In 1970, he formed a collective trio, Apogee, with saxophonist David S. Ware and drummer Marc Edwards.

Outside of the jazz world, he has composed music for theater, including Rita Dove‘s “The Darker Side of the Earth” at the Guthrie Theater, “Feathers at the Flame” by Laurie Carlos at The Kitchen, and “A Still Life” by Emily Mann. He has worked with dance troupes; he has scored and composed music for movies.

Ken Filiano (b, 1952)
Filiano was born in Patchogue, New York. He began playing trumpet as a child and continued to play the instrument while attending Syracuse University. Nearing the end of his undergraduate work, Filiano decided to switch to bass receiving a Bachelor of Music in Double Bass from Syracuse University in 1978.

Composer as well and improviser and teacher, Ken Filiano performs around the world collaborating with leading artists in multiple genres. Ken leads two quartets, Quantum Entanglements and Baudolino’s Dilemma, and is co-leader of The Steve Adams/Ken Filiano Duo.

Filiano began his professional career in 1974, working across the Northeastern United States from his home base in Syracuse, New York. From 1975-76 he was the principal bassist in the Syracuse University Orchestra.

As the decade began, Filiano lived in Boston. From 1980-83 he was a member of the Search quartet, performing and giving master classes sponsored by the Performing Artist Association of New England. In 1983, Filiano relocated to Los Angeles, California. He began to work as a freelance bassist in classical recording studios and on the jazz scene. Ken teaches master classes in bass and mprovisation; has a private bass studio; and is a Guiding Artist and Advisor at Creative Music Studio in Woodstock, NY.

The Creative Music Series (CMS) was established in January, 2015, to showcase the work of adventurous jazz musicians from out-of-state, presenting them in intimate venues in the Cambridge/Somerville area.  My endeavor was a reaction to the apparent lack of invitations being extended to accomplished, new talent and even unknown musicians to the Boston area.  CMS has now begun to zero in on Boston based musicians who are creating their own projects with these out-of-town guests, and taking these musical risks to find an expression and gain a wider appreciation. https://www.facebook.com/CMS.in.Cambridge.MA/.

See who is hiring