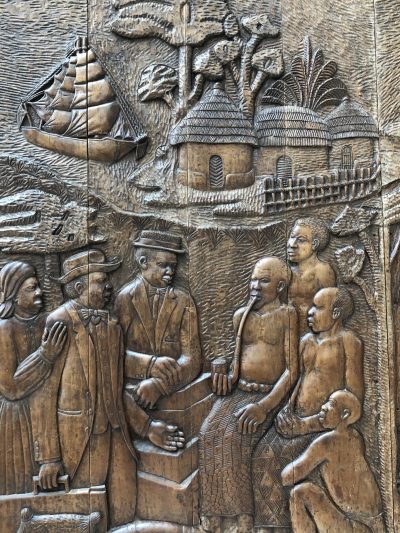 Mayor Walsh feels the art will do it over Kevin Peterson and the New Democracy Coalition’s community-backed proposal to remove a slaver’s name from the building.

In 1740 at a public meeting, merchant Peter Faneuil offered to build it at his own cost as a gift to the town. The National Park Service says some of Boston’s early slave auctions took place near Faneuil Hall.

Today the City of Boston is considering the erection of a million dollar art installation designed by a Mass College of Art Professor for Faneuil Hall to remember Boston’s role in the African Slave trade and memorialize the enslaved Africans. The fund raising is underway. His proposal is on the desk of a likely funder.

On July 13th 2018, a WGBH website article reported on the current state of the project. What should a memorial for a slave look like this VOX article examines.

In Boston, imagine there will be artwork representing a SLAVE AUCTION BLOCK.  Click the WGBH article link above to learn read more about the Faneuil Hall design idea and see the mayor’s comments about why he wishes to move this proposed idea forward.