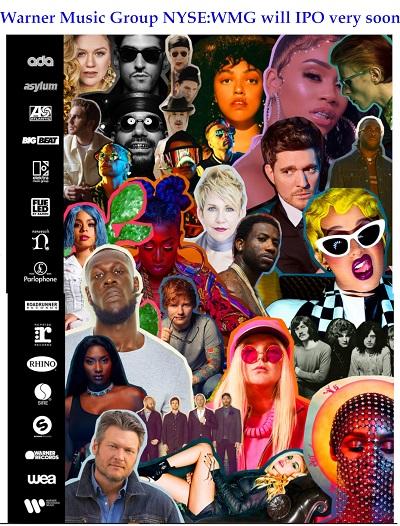 Warner stock began trading on the exchange today as (WMG) in quest to raise $1.7B. It opened 8% above the retail price of $25/sh.

An advisory panel made up of appointees from Warner Music Group

( WMG ) and the Blavatnik Family Foundation will establish procedures to identify and support those in the music community, and organizations strengthening education, and promoting equality, opportunity, diversity and inclusion. The advisory panel will determine the amount of the financial gifts and timing.

Steve Cooper, CEO, Warner Music Group ( WMG ) said, “This fund will support the extraordinary, dedicated organizations that are on the front lines of the fight against racism and injustice, and that help those in need across the music industry. Our advisory panel, which will draw from a diverse cross-section of people from our team and the wider community, will help us be very thoughtful and accountable in how we make an impact. We’re determined to contribute, on a sustained long-term basis, to the effort to bring about real change.”

The Blavatnik Family Foundation is exclusively self-funded by American-British industrialist and philanthropist Len Blavatnik, a majority owner and the founder and chairman of Access Industries, a privately held industrial group based in the United States.

) is also home to ADA, the independent artist and label services company, as well as consumer brands such as Songkick the live music app, EMP the merchandise e-tailer, and UPROXX the youth culture destination.

About the Blavatnik Family Foundation
The Blavatnik Family Foundation is an active supporter of world-renowned educational, scientific, cultural, and charitable institutions in the United States, the United Kingdom, Israel, Russia and throughout the world. The Foundation is headed by Len Blavatnik, a global industrialist and philanthropist and the founder and chairman of Access Industries, a privately held industrial group based in the U.S. with global strategic interests. See more at www.blavatnikfoundation.org.

Cash + Voices from Arts and Business Organizations who support #BlackLivesMatter and Personal Responses to the Systemic Racism in our Communities.